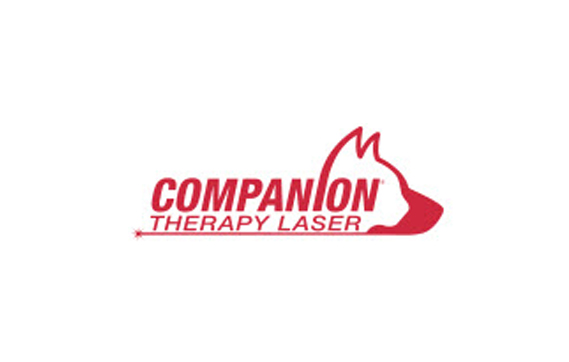 Laser Therapy is an FDA-cleared modality that reduces inflammation and that results in pain reduction. Laser Therapy is effective in treating acute pain, chronic conditions, and post-operative pain.

Laser therapy treatment is safe, painless and fast. Treatments to deeper tissues are administered in 5 to 10 minutes. Typically, even chronic patients exhibit improvement after 3 to 5 treatment sessions. Laser therapy utilizes the body’s own healing powers by stimulating cellular activity. Despite short treatment times, laser therapy treatments initiate a healing process that continues to actively reduce inflammation for up to 24 hours after treatment.

Companion therapy lasers are the most popular among veterinarians. Laser therapy is a clinically proven modality in both human and veterinary medicine. LiteCure, the parent company of Companion, is the leader in scientific research and education.

The term “laser” originated as an acronym that describes its process, ie, light amplification of stimulated emission of radiation. Like acupuncture and massage, laser therapy lessens pain, relaxes muscles, and improves circulation. It accomplishes this by altering the physiology of cells and tissue by means of light (photons) instead of an acupuncture needle or manual pressure. Therefore, treatment effectiveness and the types of responses seen depend heavily on if and how light enters living tissue.

Mechanisms of Action
For tissue to absorb light and alter its physiology, a photochemical or photobiologic event must occur. Ideally, this event would take place within the target tissue(s), whether it be skin, muscle, fascia, nerves, vessels, bones, and/or joints. A “photoacceptor” molecule, also known as a “chromophore,” responds to light by initiating a series of physiologic responses that engender healing and improved tissue homeostasis. When a chromophore (such as cytochrome c oxidase in the mitochrondria respiratory chain) absorbs a photon from laser-treated tissue, an electron within the chromophore becomes excited and jumps from a low- to a higher-energy orbit. This increased electron energy provides the impetus for the system to perform cellular activities geared toward growth and repair.

The effects of laser on mitochondria, cells, and tissue is called “photobiomodulation.” This collective process encompasses not only the effects of lasers but also those of light-emitting diodes (LEDs) and other light sources. Light therapy also causes vasodilation by relaxing endothelial smooth muscle, likely through nitric oxide mechanisms. Vasodilation improves tissue oxygenation and supports the migration of immune cells into tissue, further aiding recovery.

Treatment Parameters
Many factors impact how light influences tissue, including its power, wavelength, strength, pulse characteristics, tissue contact, and the nature of its beam. As indicated above, photobiomodulation entails changes at the subcellular, cellular, and tissular levels. Within the mitochondria, activated photons engender increases in production of ATP, modulation of reactive oxygen species, and induction of transcription factors. These factors encourage cell proliferation and migration, normalized cytokine levels, enhanced production of growth factors, modulated levels of inflammatory mediators, and improved oxygenation of tissue.

Power and Dose:
The term “low level laser therapy” (LLLT) refers to the use of light at much lower levels than those used for tissue ablation or photocoagulation. Newer, high-powered therapy devices that deliver power similar to surgical lasers (but with a less concentrated beam) no longer constitute LLLT. Some even heat tissue, meaning that the term “cold laser” is also inaccurate.

Wavelength:
Most therapy units use red or near infrared light, from 600 nm to 1070 nm. This range constitutes the “optical window” wherein effective absorption into tissue is maximal. That said, units with green, blue, and violet light (~400 nm range) are becoming more popular. Visible light ranges from 390 to 760 nm, progressing from violet to blue, green, yellow, orange, and red at 600 nm.

The types and depth of tissue that respond to light therapy depend on the wavelength delivered. Certain molecules, such as melanin and hemoglobin, preferentially absorb light in the 600 nm range. To reach deeper tissues, wavelengths (810 nm, 980 nm) that absorb less in superficial tissue can be used, leaving more light to reach for deeper sites such as bone, the brain, and internal organs.

Laser beams differ from other types of light therapy, including LEDs, by being monochromatic (existing within a narrow band of wavelengths), coherent (tightly aligned), and collimated (photons travel in parallel). The more light scatters within tissue, the less intense the biologic impact, which may or may not be the desired outcome. However, debate continues about the relative value and differences between laser light and LEDs.

Pulsing may also improve tissue responses by resonating with a fundamental frequency to which cells innately respond, commonly exhibited by neural structures.

Indications
For more than half a century, scientists have recognized the potential for photomedicine approaches to reduce inflammation, pain, and swelling, as well as to speed wound healing. More recently, medical researchers have uncovered additional benefits pertaining to deeper issues, such as myocardial infarction, spinal cord injury, traumatic brain injury, and stroke. Additional applications include alleviation of pain, trigger point pathology, and joint dysfunction.

Contraindications
Contraindications to direct laser treatment include carcinoma, thyroid gland, active hemorrhage, and autonomic nerve centers. Laser therapy should be avoided in patients in which immune stimulation is not desired, including those with lymphoma or on immunosuppressant medications. In immature patients, higher powered laser therapy devices may stimulate premature closure of epiphyses. Thus, caution is warranted over long bones in animals

Adverse Effects
Properly used, laser therapy appears to be very safe. However, higher powered lasers run the risk of inducing thermal burns when improperly used. Tattoos, when lasered, can cause intense pain due to the high amount of light absorption by deposited pigment. Questions remain about the ability of laser therapy to stimulate neoplastic growth and, if so, at what wavelength(s) and power(s).

Laser light can damage the retina, whether reflected off shiny surfaces or shown directly into the eye. Laser goggles protect against indirect exposure but not against direct. One should never look into the applicator of a laser therapy device.

Laser light longer than 760 nm is invisible to the human eye. As such, unless a treatment applicator produces a visible finder beam or audible signal, the practitioner will not know when the laser is emitting light. This could cause inadvertent eye exposure and retinal damage. It also could cause confusion about where the beam is pointing. For this reason, infrared laser devices that lack a clear indicator of when the beam is on pose potential safety hazards.

Drug Interactions
The immunostimulatory effects of laser therapy may counteract immunosuppressive actions of certain medications. In addition, photosensitizing agents such as hypericin in St. John’s wort may augment the dermatologic impact of laser light.

Controversies
The main controversies surrounding laser therapy involve questions and unproven claims related to pulsed therapy, the advantage of low- or high-powered units, and the longterm safety of high-powered treatment.

Welcome to The Veterinary Clinic at Gloria Switch

The Veterinary Clinic at Gloria Switch Veterinary Services have been providing quality health care services to pets in the Gloria Switch area with over 30 years experience. It is our aim to provide quality preventive, diagnostic and medical services so each of your precious pets lives a long and healthy life.

Appointments with veterinarian start at 9:00 am.

The Veterinary Clinic at Gloria Switch